What the Wizarding World has in store for 2022

We know that January can be a rather dreary time of year, so to add a little sparkle, we have put together this handy guide for you so you can prepare for some of the things the Wizarding World has to offer in the next 12 months. The spellbinding stories of J.K. Rowling are taking on a whole new lease of life in 2022, in the forms of games, films, documentaries and more. In no particular order, here’s everything we know so far.

Fantastic Beasts: The Secrets of Dumbledore is coming to theatres in April

Fantastic Beasts: The Secrets of Dumbledore hits the big screen in 2022 with an all-new adventure full of action-packed magic and a series of mysteries and revelations that will forever define the fate of the wizarding world. Expect favourite characters and creatures to return, alongside familiar locations and an intrepid team of wizards, witches and one brave Muggle baker, assembled by Dumbledore to defeat Grindelwald. In this instalment, Grindelwald's power is only growing - and the stakes are higher than ever before. Released worldwide, you won’t want to miss this cinematic event this April. Click here for a first look at the trailer. 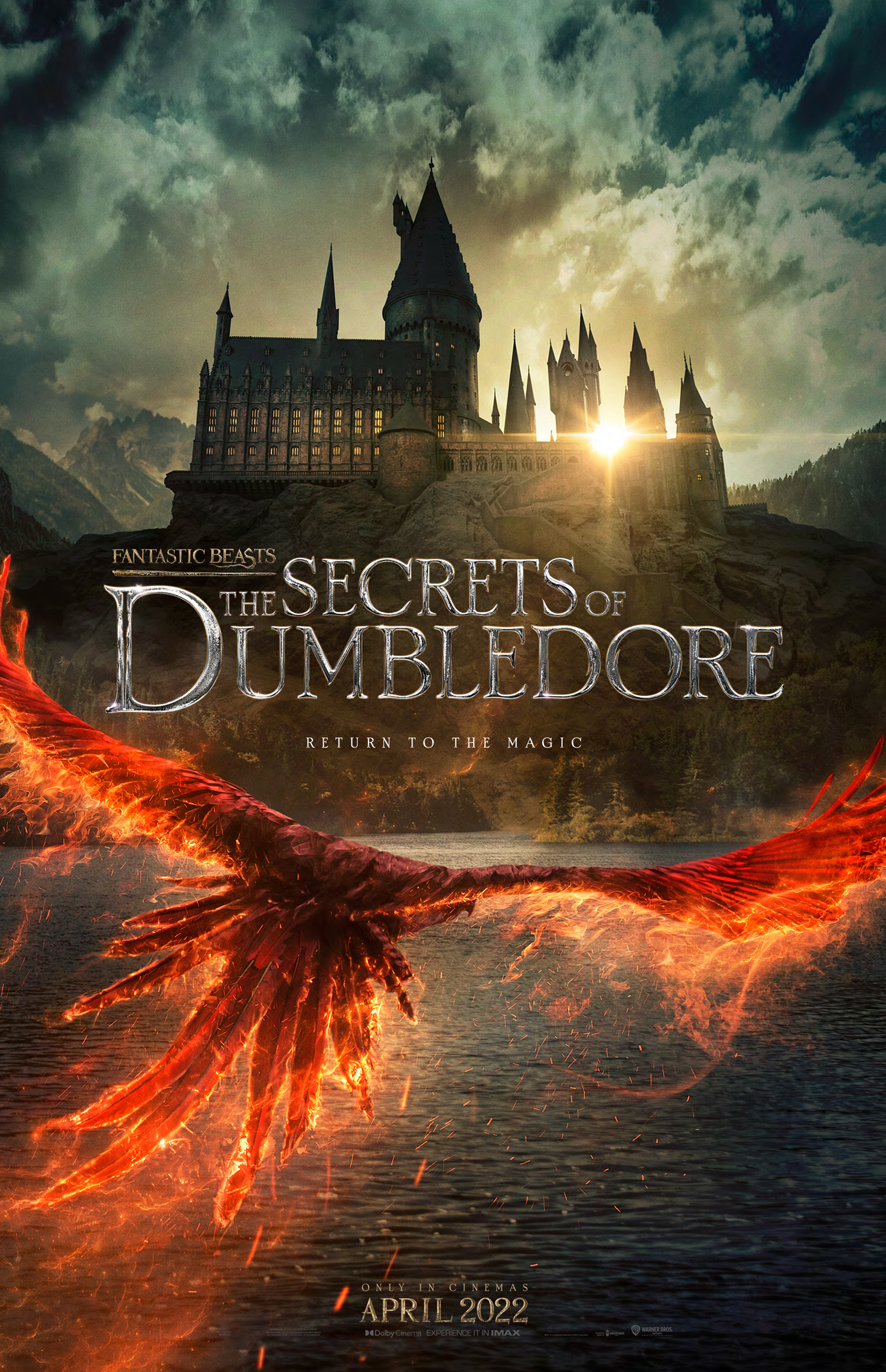 In 2022, Fantastic Beasts: A Natural History dives into the world of magical creatures and why we all remain so fascinated with them to this day. Stephen Fry examines everything from the real-life creatures that inspired J.K. Rowling’s fantastic beasts, to the curious animals you find in the Muggle world in this documentary which will be coming soon to BBC One and iPlayer in the UK. And keep an eye out on WizardingWorld.com for more information on when it will air and where it will broadcast internationally.

The Hogwarts Legacy video game will be arriving this year

2022 is also the year when the highly anticipated console game from Warner Bros. Games’ Portkey Games label, Hogwarts Legacy, is set to be released. Developed by Avalanche Software, this action RPG allows players to be at the centre of their own adventure set during the late 1800s wizarding world. From learning powerful spells and brewing potions, to honing combat skills and taming magical beasts, this game will allow players to experience the magical world as a student at Hogwarts School of Witchcraft and Wizardry like never before as they determine the fate of the entire wizarding world. Learn more about Hogwarts Legacy now.

There are exciting events happening at Warner Bros. Studio Tour London – The Making of Harry Potter

There are plenty of things to look forward to at Warner Bros. Studio Tour London next year, which is celebrating the tenth anniversary of its opening in March.

Watch out for Magical Mischief springing up in the New Year – a celebration of filmmaking trickery and magical pranks. You can certainly expect Weasley pranks and Cornish pixies to be involved! If you have our official app, you’ll even be able to unlock an Enchanted Key trail as you explore the Studio Tour displays - answering quiz questions about film-making wizardry as you go along.

Harry Potter: The Exhibition will be arriving in Philadelphia

The all-new ground-breaking behind-the-scenes touring exhibition is set to arrive in Philadelphia on 18th February 2022. Fans can expect beautifully crafted environments that honour the iconic moments, characters, settings, and beasts seen in the films using best-in-class immersive design and technology to deliver an unforgettable personalised experience. Guests will have an opportunity to engage with innovative, awe-inspiring, and magical environments and installations in ways never before experienced in a touring exhibition Visitors will be able to get up close and personal with everything from authentic props to the original costumes. Find out more about the Philadelphia exhibition now.

Who can believe that this year marks a quarter of a century since Harry Potter and the Philosopher’s Stone was first published here in the UK? There is no doubt that this momentous anniversary is cause for celebration.

To celebrate, Bloomsbury is releasing a special commemorative edition of the first book, featuring the original cover artwork by Thomas Taylor. Since its release in 1997, his jacket illustration of Harry Potter standing on Platform Nine and Three-Quarters has become one of the most recognisable book covers of the twentieth century. Not only does this silver anniversary edition revive Thomas Taylor’s iconic cover, it also contains a wealth of fantastic bonus content. Readers are invited to re-discover the original Hogwarts crest, enjoy magical drawings from the author’s own archive and read Thomas Taylor’s charming story of how a young artist came to illustrate Harry Potter for the very first time.

Pre-order your special edition of Harry Potter and the Philosopher's Stone today. Remember to stay tuned for all the ways the Wizarding World will be marking this important anniversary in 2022.

Harry Potter Book Night is back for its eighth outing with a theme focused on Magical Journeys. To help mark 25 years since the UK publication of the first book, this year’s global celebration will reflect the magical journey that the Harry Potter books have taken fans on since their publication on the 26th June 1997. With games, crafts and activities, there is plenty for fans around the world to get stuck in to and enjoy.

Harry Potter and the Cursed Child continues to spread its magic around the world – and will be opening in new places!

This year is set to be another exciting one for Harry Potter and the Cursed Child – as the play prepares to open (and reopen) more productions around the world. In fact, previews of the show have just started up again in San Francisco at the Curran Theater!

The play will also be making waves in Asia for the first time, as the stage-play prepares to open in Tokyo, Japan! We’re so excited to meet a whole new cast for this production and introduce a whole new country to the magic of the eighth story. And that’s not all - in May, a new production will also premiere at the Ed Mirvish theatre in Toronto.

The play continues in the original two-part format in London and Hamburg. The reimagined production premiered in New York last November and is currently running in San Francisco, with Melbourne adopting this version from May 2022. Toronto and Tokyo will open with the single-ticket production too. Learn more about the reimagined version here!

For more information about where you can experience the wonder of Cursed Child, click here.

In 2022, you can experience the Harry Potter films in full HD on the big screen accompanied by a full symphony orchestra performing the mesmerising score live. As a global tour, this unforgetabble experience is coming to the US, Portgual, Canada, Australia, Germany, France, Belgium, Switzerland, China, Nordics and Netherlands this year. For all the information about tour dates in 2022 and to book your tickets, click here.

In case you missed it, Harry Potter: Return to Hogwarts is now streaming globally

To celebrate twenty years since Harry Potter and the Philosopher’s Stone was released in cinemas, fans around the world can watch Daniel Radcliffe, Rupert Grint and Emma Watson head back to Hogwarts in this special retrospective show. Joined by fellow members of the cast and crew, and with archive footage, this a fantastic celebration to still catch up on! Harry Potter: Return to Hogwarts, which launched on 1st January in many territories, is still available to watch on various streaming services, depending on where you are in the world.

With so many wonderful Wizarding World updates happening in 2022, now is the perfect time to join the Harry Potter Fan Club and sign up to our newsletter to stay up to date with all the latest news and features.