As they entered November, the weather turned very cold. The mountains around the school became icy grey and the lake like chilled steel. Every morning the ground was covered in frost. Hagrid could be seen from the upstairs windows, defrosting broomsticks on the Quidditch pitch, bundled up in a long moleskin overcoat, rabbit-fur gloves and enormous beaverskin boots.
Harry Potter and the Philosopher’s Stone

While Muggles must contend with using their credit cards to shift ice from their Muggle car windshields, the wizarding world has similar frosty issues on their chosen mode of transport: broomsticks. Thankfully, Hogwarts has Hagrid, always dressed for all-elements...

Two weeks before the end of term, the sky lightened suddenly to a dazzling, opaline white and the muddy grounds were revealed one morning covered in glittering frost. Inside the castle, there was a buzz of Christmas in the air. Professor Flitwick, the Charms teacher, had already decorated his classroom with shimmering lights that turned out to be real, fluttering fairies.
Harry Potter and the Prisoner of Azkaban

We love this description of the ‘opaline white’ sky that cascades over Hogwarts in this quote from Prisoner of Azkaban. And, naturally, Professor Flitwick is making the inside of the castle just as charming with some ingenious decorating ideas with the help of some fairies.

The introduction of Hogsmeade

Hogsmeade looked like a Christmas card; the little thatched cottages and shops were all covered in a layer of crisp snow; there were holly wreaths on the doors and strings of enchanted candles hanging in the trees.
Harry Potter and the Prisoner of Azkaban

Thatched cottages! Snow everywhere! Enchanted candles in the trees! Everything about Hogsmeade just sounds so twee and festive, it makes us extra-livid that Uncle Vernon wouldn’t sign that pesky permission slip. Oh, to drop by the Three Broomsticks with a flagon of comforting Butterbeer. 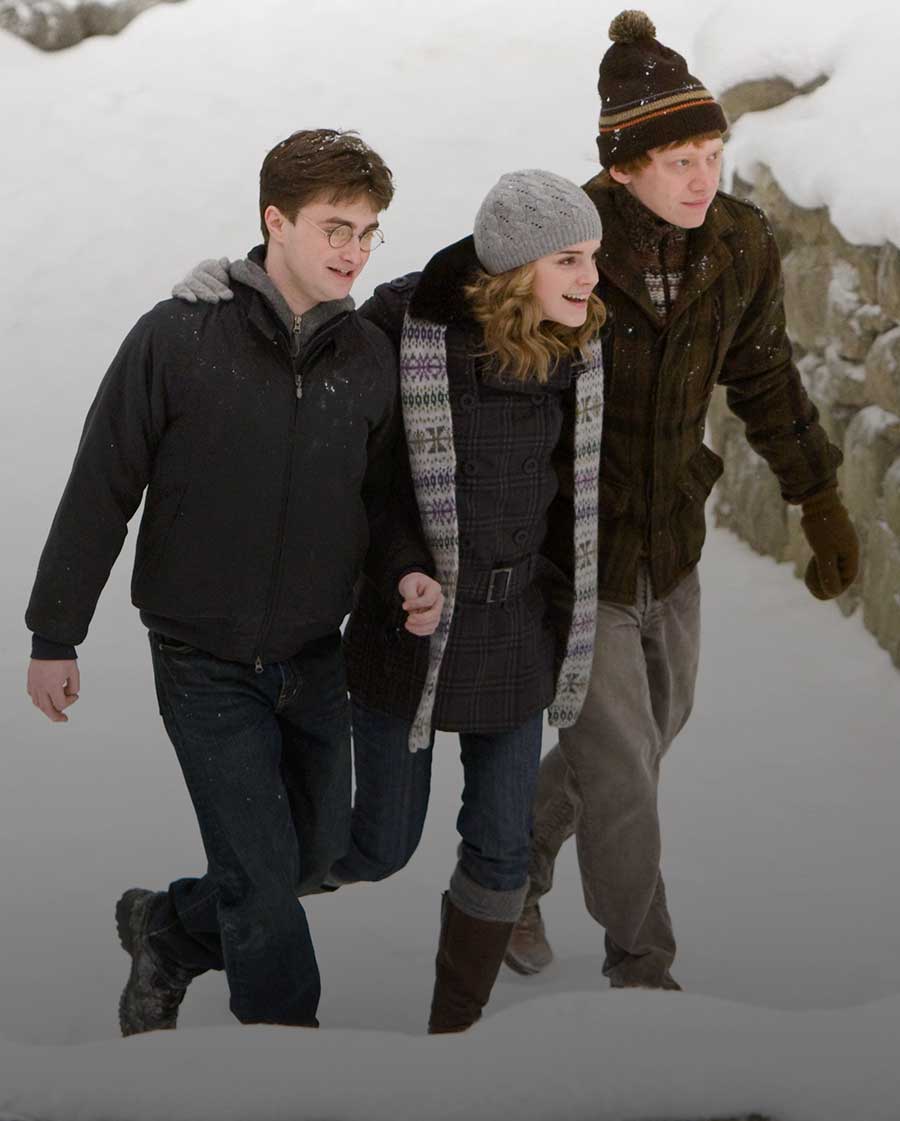 Drinking Butterbeer for the first time

Harry and Hermione made their way to the back of the room, where there was a small, vacant table between the window and a handsome Christmas tree which stood next to the fireplace. Ron came back five minutes later, carrying three foaming tankards of hot Butterbeer.

‘Happy Christmas!’ he said happily, raising his tankard. Harry drank deeply. It was the most delicious thing he’d ever tasted and >seemed to heat every bit of him from the inside.
Harry Potter and the Prisoner of Azkaban

Speaking of Butterbeer, the first time Harry drinks the comforting concoction made us extremely jealous. The way this warming beverage is described here puts it on a whole level beyond our Muggle hot chocolate. The Christmassy setting of the pub with the roaring fireplace just adds to the ambience too.

Hermione ploughed her way back to Hagrid’s cabin through two feet of snow on Sunday morning. Harry and Ron wanted to go with her, but their mountain of homework had reached an alarming height again, so they remained grudgingly in the common room, trying to ignore the gleeful shouts drifting up from the grounds outside, where students were enjoying themselves skating on the frozen lake, tobogganing and, worst of all, bewitching snowballs to zoom up to Gryffindor Tower and rap hard on the windows.

‘Oi!’ bellowed Ron, finally losing patience and sticking his head out of the window, ‘I am a prefect and if one more snowball hits this window – OUCH!’ He withdrew his head sharply, his face covered in snow. ‘It’s Fred and George,’ he said bitterly, slamming the window behind him. ‘Gits …’
Harry Potter and the Order of the Phoenix

Ron may have thought his Prefect status in his fifth year would’ve earnt him a bit of respect in the family, but this simply gave the Weasley twins more ammunition to flout his authority. Still, what’s more winterry than a snowball in the face?

Of course, this was not the only time the Weasley twins got creative with the weather!

“Christmas was coming. One morning in mid-December, Hogwarts woke to find itself covered in several feet of snow. The lake froze solid and the Weasley twins were punished for bewitching several snowballs so that they followed Quirrell around, bouncing off the back of his turban.”
Harry Potter and the Philosopher’s Stone

This moment seems perfectly cheeky and innocent at first, but when we later learnt exactly what was inside Quirrell’s turban, we realised the Weasley twins were basically doing some extra-curricular Defence Against the Dark Arts!